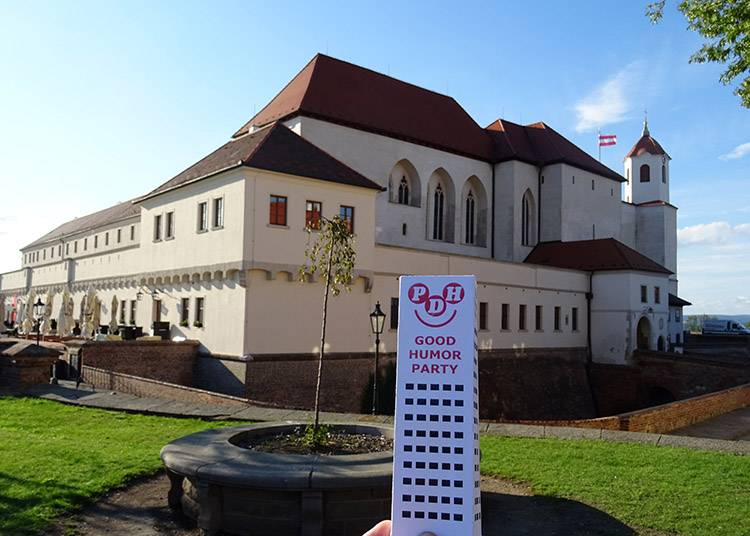 Polish satirist by some is called jokingly a developer. Because for the last several years he has been building the remarkable skyscrapers all over the world. They have the size of the toothpaste box, and soon there will be 500 of them

The first Happy Skyscraper was built in New York in October 2012. Since no one here is wondering about ever higher skyscrapers, Szczepan Sadurski decided to build… the smallest skyscraper in Manhattan. A few photos at the famous Chrysler Building took a few minutes and supposed to be a one-time happening. However, after he returned to Poland, he decided to continue the fun. A specially designed model the „skyscraper” ready to be cut out with scissors and glued, was advertised on the Internet and soon people joined the fun, who were taking pictures of a little traveler in public places – in front of well-known buildings, castles, bridges and stadiums, city streets, next to the volcanoes… 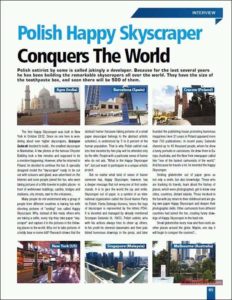 Many people do not understand why a group of people from different countries is having fun with shooting pictures of „smiling” box called Happy Skyscraper. Why, instead of like many others who are taking a selfie, every trip they take paper „skyscraper” and capture it in the pictures in the following places in the world. Why not to take pictures of a teddy bear or some doll? Research shows that the abstract humor (because taking pictures of a small paper skyscraper belongs to the abstract artistic activities), is understood by 5 to 8 percent of the human population. That is why Polish satirist realizes that invented by him play will be attended only by the elite. People with a particular sense of humor who do not ask, „What is the Happy Skyscraper for”, but just want to participate in a unique artistic project.

But no matter what kind of sense of humor someone has, Happy Skyscraper, however, has a deeper message that not everyone at first understands. It is to give the world the joy and smile. Skyscraper out of paper, is a symbol of an international organization called the Good Humor Party (in Polish: Partia Dobrego Humoru, hence the logo of skyscraper is represented by the letters PDH). It is invented and managed by already mentioned Szczepan Sadurski (b. 1965), Polish satirist, who with his actions always tries to cheer up others. In his youth he cheered classmates and then published humorous drawings in the press, and later founded the publishing house promoting humorous magazines (over 21 years in Poland appeared more than 750 publications). In recent years, Sadurski cheered up to 40 thousand people, whom he drew a funny portraits or caricatures. He drew them in Europe, Australia, and the New York newspaper called him „one of the fastest cartoonists of the world.” And because he travels a lot, he invented the Happy Skyscraper.

Smiling globetrotter out of paper gives us not only a smile, but also knowledge. Those who are tracking its travels, learn about the history of places, which were photographed, get to know new cities, countries, distant islands. Those involved in the fun with joy return to their childhood and are gluing own paper Happy Skyscraper and deepen their photographic skills. Other cartoonists from different countries had joined the fun, creating funny drawings of Happy Skyscraper in the lead role.

Small globetrotter every now and then visits another places around the globe. Maybe, one day it will begin to conquer the cosmos?… 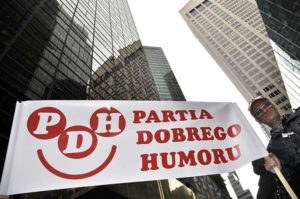 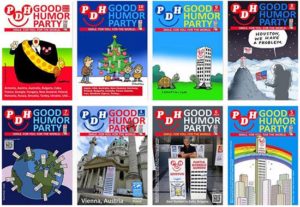 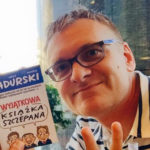 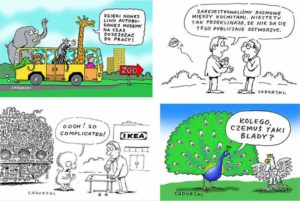 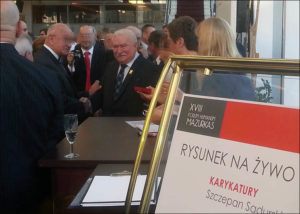